On Friday, our class attended FJ Brennan's first ever Tech Summit for students in grades 5 - 7.  This was held at the high school, had sessions run by high schoolers and was overseen by a Google for Education Certified Trainer and Innovator.  FANCY!

All feeder schools were invited to take part.  Our JK-6 elementary school alone sent 60 students and were joined by some 350 other participants.  Conveniently, the high school kids were off this day, giving us access to their gym, WiFi, classrooms and cafeteria.

After meeting for introductions of participating schools, O Canada and prayer, each classroom was brought to their learning room for their first workshop.  Teachers had previously signed up for areas of interest for their own kids.  My class is 2/3 boys, many of whom count themselves as computer savvy or "gamers" and who often give one to two minutes of attention to something if they are not interested.  I needed something that would engage my students beyond how to create Google Slides (although they certainly could use some time to play with all of the features available and begin including them in their presentations!) or how to use Google Drawing.   Because there were three 50-minute sessions ... and that would quickly add up to dealing with behaviours ... and attitude if these kids did not buy into the learning opportunity provided them.

We dipped our feet in the CODING pool with our first session where we did not even open our computers! This might have been my favourite part of the day as it was a big eye opener for the know-it-all, can't-be-bothered, let's-do-the-least-amount-of-work types (read majority of class).  By giving instructions, the students had to get a "robot" (Kyle Tran from FJ Brennan) to cross the classroom and pick up a cup.

Instruction 1:  Cross the class and get the cup off of the desk

God bless Kyle!  I love that, like a robot, he did not bat an eye while I was overheating by that cocky instruction.  He simply crossed the class until he crashed into the first obstacle  ...  which was closest to him ... and nowhere near the desk the kids wanted him to go to!

Instruction 2:  Go to the desk with the cups on it and pick one up. 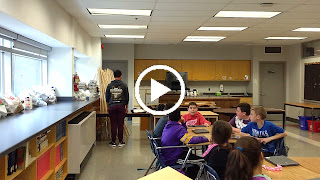 Of course!  Still trying to outsmart the robot and continuing to make my blood boil by doing the least amount of work and thinking that that is what makes them so clever.  GRRR!
"Kylebot" starts walking in the opposite direction as though searching for his goal but crashes into the window. 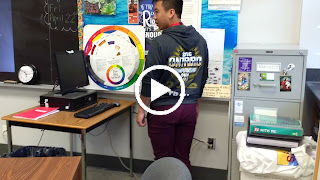 Kylebot turns to the right but doesn't stop when they want him to because, well, he's a robot and his programming has to be exact.  He continues turning in a circle.  So someone shouts "Stop" and he does. After about 30 trial and error instructions, Kylebot reaches the destination and successfully gets the cup.

Can they do this more succinctly?

The students were then given the chance to act as the robot (smart alecs UNITE) while their table group gave instructions to get them to change a stack of 3 cups to a tower and a stack of 4 cups to two towers of cups.  This proved frustrating for some and may have been a good lesson for all about saying what you mean because robots (and teachers and EQAO markers) can't guess what you mean! 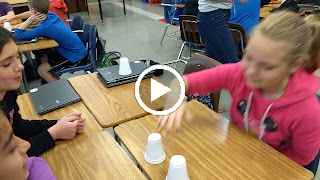 After lunch in the cafeteria, we regrouped for our second session, An Hour of Code, where the students chose to program their own version of popular games on their computers.  It really did not take an hour to get your game to be playable but you certainly could spend time tweaking and adding codes to make your version less or more difficult / interesting.

When the students were satisfied with their program, they could click FINISH and print a certificate of completion.
Almost 100% of the class was actively engaged in programming or helping others (ME!) to get their game to become more successful and interesting.  Some of the girls found it difficult but I would chalk that up to less exposure and that, traditionally, girls aren't/haven't been pushed in the direction of computer science.

Wouldn't this be a more acceptable (read educational) use of spare time in class than PLAYING games? Computer science! Loved the coding!

Our final session of the day was learning more about WeVideo, Chromebook's version of iMovie.  Since we use Chromebooks all day, it seemed we should see what WeVideo could do as this would be another effective tool for presenting our work.  We already LOVE iMovie and have access to iPads for short bursts of time but it seems such a bother to sign them out and make sure we get the right one the next time (and that no one has inadvertently deleted our work) and then sharing to our Google Drive.

WeVideo is not quite on the level of iMovie but it will definitely serve the purpose.  I hope to have the students record their own poetry using WeVideo and we'll upload to our YouTube channel in the future.


What's your favourite coding activity?  Let us know in the comments below! 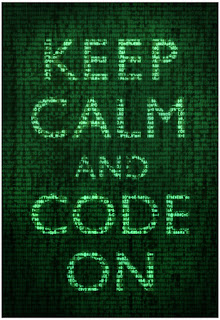